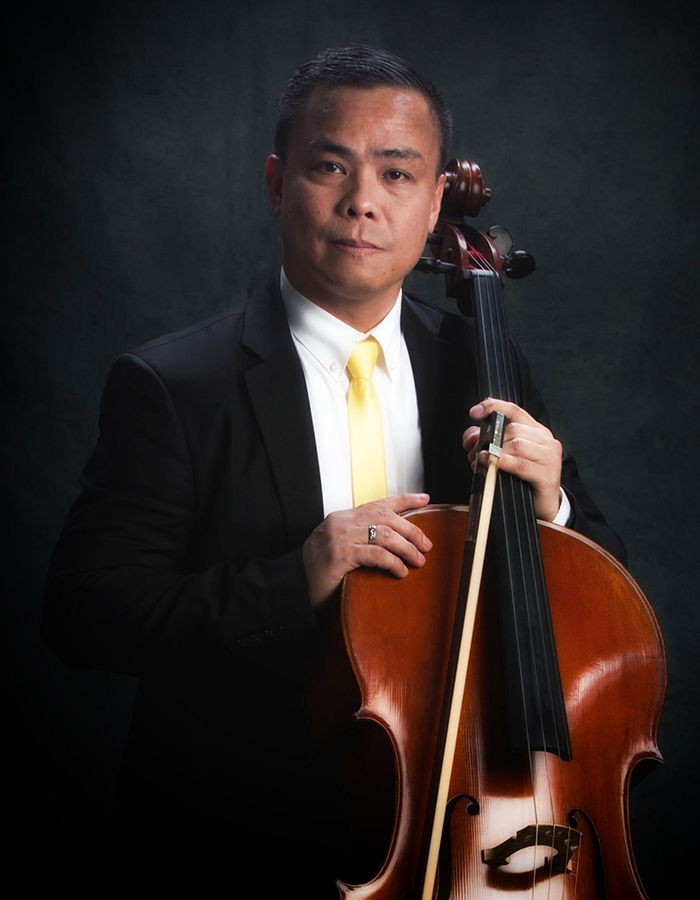 Prof. Arnold Josue is the cello principal of Manila Symphony Orchestra since 2015. Prior to his assignment in MSO, he was cello principal for Manila Philharmonic Orchestra (2007-2015), and assistant principal (2001-2004) and cello principal (2004-2006) for San Miguel Philharmonic Orchestra. Prof. Josue has performed numerous concerts with the MSO including its annual gala concerts, Visayas concert tour, Candon Music Festival, ballet productions, special concerts, and outreach concerts. He performed with the MSO in its first international concert tour in 2019, the 5th Hunhe River Bank Symphony Art Festival held at the Grand Shengjing Theater , Shenyang, China.

Some of his most notable works include performances at the Rose Historic Site in Taipei, Taiwan in 2019 with the Bernie Pasamba Strings for the Philippine Independence Day, in Asia Orchestra Week in 2013 in Tokyo, Japan as principal cellist with the Manila Philharmonic Orchestra, and in the Hongkong Piano Competition in 2008 with the City Chamber Orchestra of Hongkong.

Prof. Josue went under the tutelage of Prof. Renato Lucas and Prof. Wilfredo Pasamba. He also completed Cello Masterclasses with German cellist Claus Kanngiesser, Spanish cellist Inaki Etxepare, and the Alexander String Quartet composed of Ge-Fang Yang, Paul Yarbrongh, Fredercik Lifsitz, and Sandy Wilson. He also attended the ASEAN Music Workshop held in Brunei, Darussalam, and Bangkok, Thailand. Prof. Josue, a Francisco Buencamino Scholar, holds a Master of Arts in Music in Cello Performance and Bachelor of Music in Cello Performance from the University of Santo Tomas. He was a First Prize Winner, Cello Category C in the National Music Competition for Young Artists (NAMCYA) in 1999.

In addition to his work with the orchestra, Professor Josue is a well-respected teacher who taught at some of the most renowned music schools in the country. He was former cello faculty at St. Scholastica’s College and Philippine Women’s University School of Music. He was guest professor at the 2019 Suzuki Korea Summer Music Festival held at Daemyung Resort Danyang South Korea.