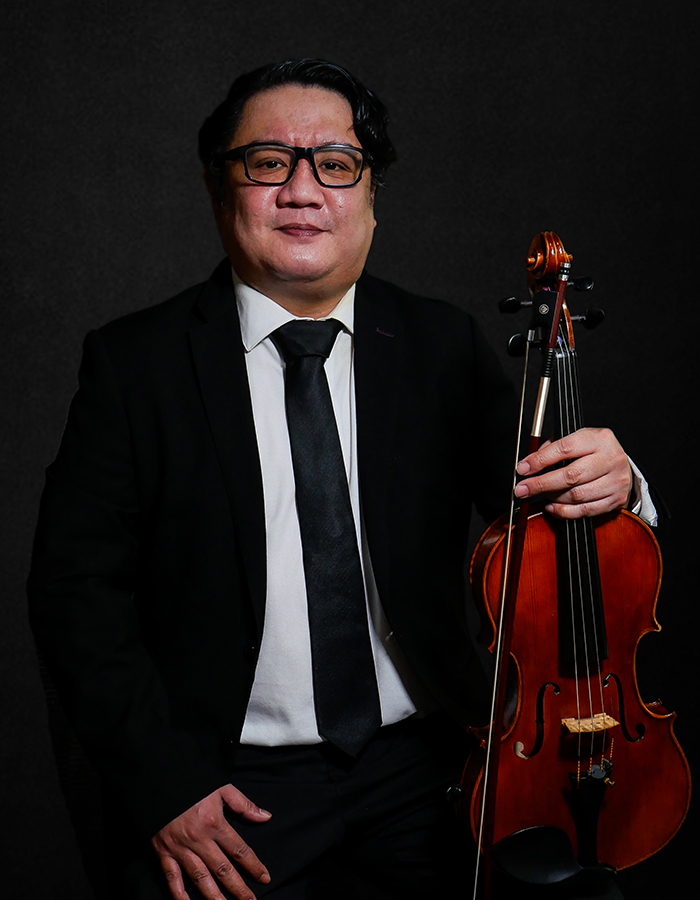 "Ivan, on the other hand, had a mature lyrical sound, solid and striking. He revealed this in Cesar Franck’s “Sonata in A Major for Violin and Piano,” in collaboration with pianist Greg Zuniega. Rapport was impeccable, and listening was a total pleasure. One savored more his elegant lyricism in the Mendelssohn concerto, which he correctly played without pause in between movements with the MSO. His playing flowed with ease, delineating the entire work with broad dispatch…" The Inquirer by Antonio C. Hila.

After winning 1st Prize at the National Music Competitions for Young Artists at the age of 15, Ivan has been performing as a soloist, collaborating with professional musicians in chamber music, playing at masterclasses with International acclaimed artists. From 2002-2004, Ivan toured as a member of the Asian Youth Orchestra to Asian countries such as Hongkong, China, Japan, Malaysia, Thailand, Singapore, and the Philippines. In 2005, he was invited as one of the 18 delegates of ASEM member countries to participate at the Asia-Europe Foundation’s first Asia-Europe music camp, I’mPulse, playing contemporary chamber music. From 2006-2008, he was granted a full-scholarship to Orchestra Programs at MasterWorks Festival in Winona Lake, Indiana, where he became the Principal 2nd violin and Assistant Concertmaster of the festival’s orchestra. In New York, Ivan earned his Bachelor degree in violin performance at Nyack College Manhattan Centre and received the Best Instrumentalist award in 2006 and 2009. He had played at some of the important venues for performing arts such as Alice Tully Hall, and "the remembering of 9/11" at New York Public Library in Fifth Avenue to name a few. He was mentored by Gert Kumi and subsequently by Stephen Clapp, Dean Emeritus of the Juilliard School.

Born into the family of musician, Ivan began his violin studies with his father at the age of 6. At 9, he was enrolled formally in the program of PREDIS (Philippine Research for Developing Instrumental Soloist) at St. Scholastica’s College in Manila founded by Basilio Manalo and Sister Mary Placid Abejo, OSB. He was the youngest member of Manila Youth Symphony Orchestra subsequently became Manila Symphony Orchestra II under the baton of his violin teachers, Arturo Molina III and Basilio Manalo.

Ivan resided in Singapore for 9 years (2010-2019) teaching violin individually or group and conducting string ensemble in a local primary school. His ensemble was awarded Gold with honours from 2012 - 2018 (MGS ‘12, CHIJ Kellock ‘12-18) at the Singapore Youth Festival. Some of his students participated and won awards in solo, chamber music competition locally and internationally, got direct admission from Methodist Girl’s School, Nanyang Girls’ High School, Singapore Chinese Girls’ School, School of the Arts and Singapore National Youth Orchestra to name a few, as well as top scorer in Singapore in Trinity Guildhall Exam and trained chamber music for Childaid Japan, Malaysia and Singapore.