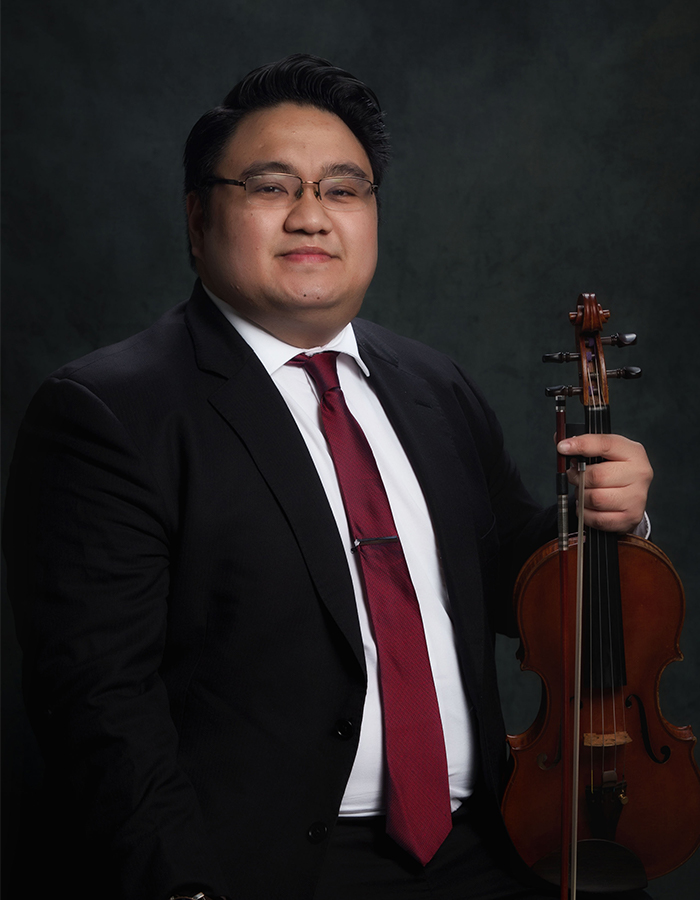 Born to a family of musicians, Mr. Saraza started playing the violin at the age of three with his father. At age 5, Mr. Saraza started violin lessons in St. Scholastica’s College under Virna Valerio, Prof. Basilio Manalo and Prof. Arturo Molina. Mr. Saraza gained attention and became a prominent violinist in the Philippines after winning first place at the National Music Competitions for Young Artists in 2002. He was also the concertmaster of PREDIS Children Orchestra, member of PREDIS chamber orchestra, and became the youngest member of the Manila Symphony Orchestra at age 13.

Mr. Saraza received both his Bachelor of Music and Master of Music degree from the Juilliard School in 2015. During his time at Juilliard, Mr. Saraza was the recipient of the Irene Diamond Graduate Fellowship, Ruth Katzman Scholarship, Juilliard Alumni scholarship and the C.V. Starr Scholarship. He also served as assistant concertmaster of Juilliard Orchestra and Juilliard Lab Orchestra. In 2015, Mr. Saraza was accepted to pursue Master of Musical Arts degree at Yale University. During his time in Yale, Mr. Saraza was the concertmaster of Yale Philharmonia, violin faculty of Yale secondary lesson division, and was the first Filipino recipient of Yale’s highly esteemed award called the Broadus Erle Prize 2016 for being the best violinist of the year and the Alumni Association Prize 2017 for high scholastic achievement and community work outside Yale University.

Today, Mr. Saraza is an avid educator on top of being a performer. He is a graduate professor of St. Scholastica’s College and violin faculty of the Manila Symphony Junior Orchestra in cooperation with Standard Insurance’s “Pursuit for Excellence” program. His recent concert in the Philippines was at the Cultural Center of the Philippines with maestro Gerard Salonga and the ABS-CBN Philharmonic Orchestra.