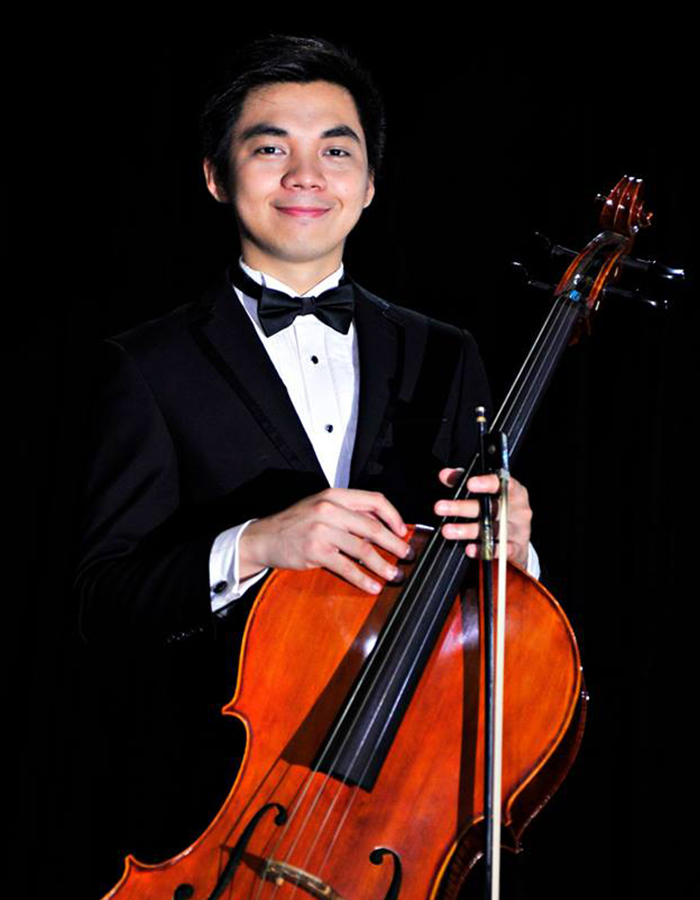 “I have learned a lot of things in the Manila Symphony Orchestra especially in musicianship, orchestra playing, and professionalism. I have also gained a lot of friends in the MSO family. Performing with the MSO has taught me different values, and gave me confidence in playing cello. Because of MSO, I was able to meet and perform with amazing local and international artists. I am deeply honored to take part in the success of MSO and share with its vision.”

Geo started playing the cello in 2009 under the Candon City Music Project sponsored by the MDS Heritage Music Foundation, Inc. and the local government of Candon City. In 2016, his university teacher, Prof. Antoni Josef Inacay, prodded Geo to audition for Manila Symphony Junior Orchestra (MSJO). The following year, upon the encouragement of MSO’s Executive Director Prof. Jeffrey Solares and then concertmaster Prof. Gina Medina-Perez, he auditioned for Manila Symphony Orchestra. Since then, Geo has been a cellist of the MSO and has performed with the orchestra in gala concerts, special concerts, ballet productions, outreach concerts, and tours including MSO Visayas Tour Concert, Candon Music Festival in Candon City, Ilocos Sur in 2019 and MSO’s first international concert in the 5th Hunhe River Symphony Art Festival held in the Shenjing Grand Theater, Shenyang, China in 2019. He also performed in Feria de Candon Musical Concerts in Candon City, Ilocos Sur held annually from 2009 to 2019. Geo is also a cellist of the internationally-awarded MSJO who won 2nd Place in 2017 and 1st Place in 2018 in the Summa Cum Laude International Youth Music Festival held at the Golden Hall of Musikverein in Vienna, Austria. Following MSJO’s two consecutive victories, Geo toured with MSJO across Europe to perform concerts in Austria, Czech Republic, Germany and Italy. He also performed with MSJO at the Korea Suzuki Association Orchestra Friendship Concert in South Korea in 2019.

Geo is an active member of his community in Candon, Ilocos Sur. He was one of the organizers of the 1st Candon Music Festival in 2019. He is also actively involved in several civic and music groups including 2nd District of Ilocos Sur Council for Culture, Arts,and Tourism since 2019, and the MDS Heritage Music Foundation, Inc., Candon City Music Project, and Candon City Chamber Orchestra since 2009.