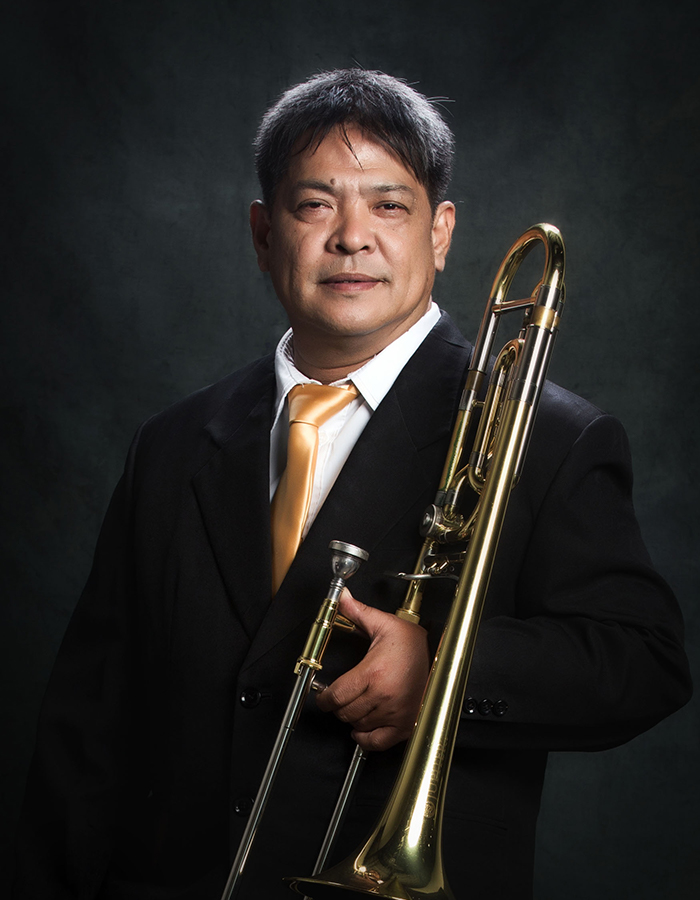 Edgardo was one of the pioneering members of the Manila Youth Symphony Orchestra (MYSO) when it was formed in 1995, and eventually joined the Manila Symphony Orchestra in 2001. (then known as MSO II) . Since then Edgardo has performed with the orchestra in numerous gala concerts, special concerts and tours, including MSO’s first international concert tour in 2019, the 5th Hunhe River Bank Symphony Art Festival held at the Grand Shengjing Theater , Shenyang, China.

Edgardo was born into a family of musicians. His father and older brother started teaching him how to play the tenor tuba or euphomium when he was 11 years old. When he was with MYSO, he played the tuba under Prof. Basilio Manalo. He eventually shifted into playing the trombone when he became a member of the MSO II.

Edgardo was also the conductor of National Champion Bands namely Banda Dos Taytay, Rizal for 20 years, and Cainta Community Band for 17 years. He was also a member of the Makati City Band from 1984-1987. He took Symphonic Band Conducting under National Artists for Music Dr. Franciso Feliciano and Maestro Lucio San Pedro. Edgardo went under the tutelage of Dr. Per Gade and Prof. Neil Ramos. Though music is his passion, Edgardo studied Bachelor of Science in Mechanical Engineering in Polytechnic University of the Philippines.

Aside from MSO, Edgardo is also presently a member of Manila City Band.