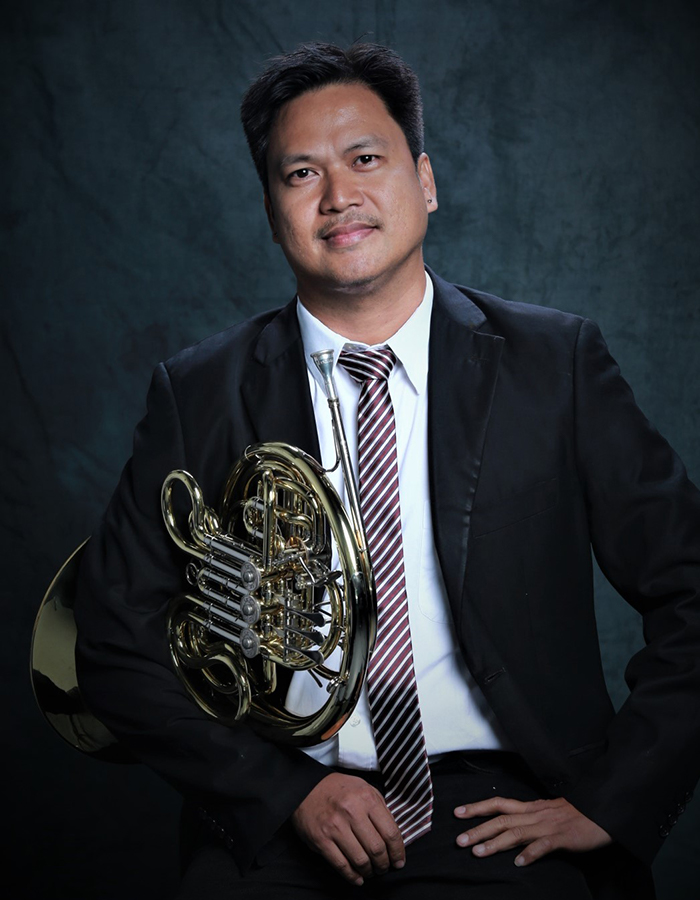 Dennis is one the pioneering members when the Manila Symphony Orchestra (then called the MSO II) was reorganized in 2001 and has since performed with the orchestra as french horn player in all its gala concerts, special concerts, ballet productions, outreach concerts, and tours including MSO Visayas Concert Tour , Candon Music Festival and MSO’s first international concert in the 5th Hunhe River Symphony Art Festival held in the Shenjing Grand Theater, Shenyang, China in 2019. Dennis also performed at the Mozart Festival Orchestra in Malaysia in 2014 and in Singapore in 2011. As percussionist, Dennis performed with MSO for Repertory Philippines’ A Christmas Carol in 2008, Fiddler on the Roof in 2007, and Sound of Music in 2006.

Dennis was born into a family of musicians and started learning music when he was 10 years old. He studied Bachelor of Music Major in French Horn and Percussion in the University of the Philippines. He was under the tutelage of Prof. Leopoldo Lopez (French horn) and Prof. Leo Roque (Percussion). He took various trainings including MSO French Horn Workshop by Prof. Leopoldo Lopez, and workshops given by Quezon City Symphonic Band by Wilfredo Cruz, San Miguel Corp. Band Clinics by Prof. Roger Llado, Rolp Campo and Benito San Jose, and Banda Kabataan 83 by Joaquin Sison. Dennis was a percussion mentor of Darangan Drum and Bells in 2016, Mabuhay Drum and Bells in 2018 and Dona Justa Guido Madrigal Drum and Bells from 2017-2019. He was a member of The Metro Manila Community Orchestra (2000-2001) and UP Philippine Symphonic Band (1994-1996).