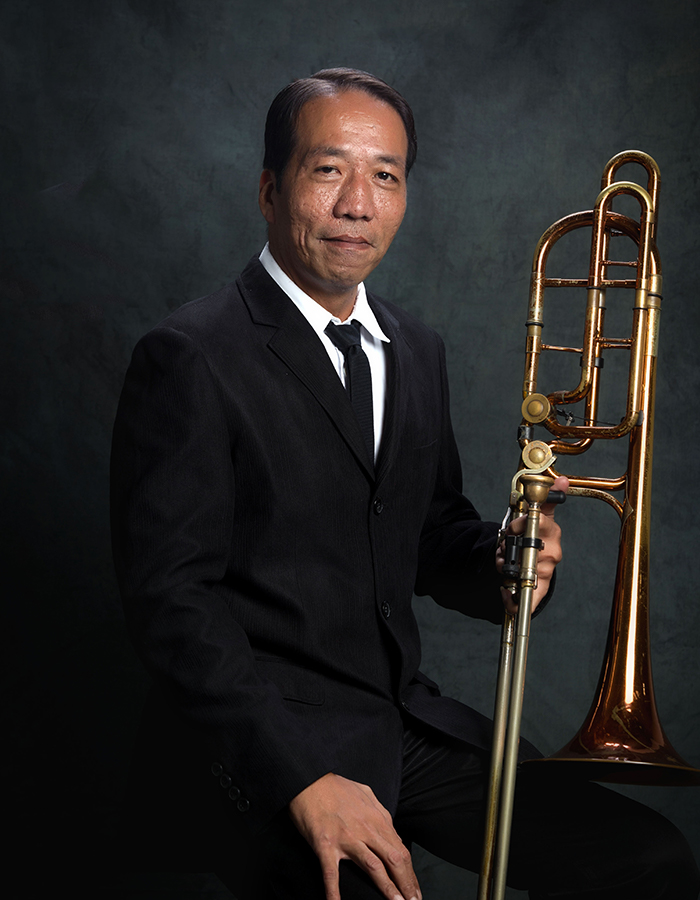 Benigno started learning music at 12 years old when he joined a local symphonic band. Music flows naturally for Benigno, having come from a family of musicians. His first teacher was his uncle, Severino Ramirez, former principal bassoon of Philippine Philharmonic Orchestra, who taught him how to play euphonium. He also studied under Velticeasar del Rosario during the early years of his musical journey. Benigno started to study trombone when he entered the university.

Benigno joined the Manila Symphony Orchestra as bass trombone player in 2004 and has performed with the orchestra in its gala concerts, special concerts, productions, and tours, including MSO’s first international concert tour in 2019, the 5th Hunhe River Bank Symphony Art Festival held at the Grand Shengjing Theater , Shenyang, China. He also performed occasionally with Manila Philharmonic Orchestra and with Philippine Philharmonic Orchestra in its 2005 concert series. Aside from MSO, Benigno is also a member of the Quezon City Symphonic Band.

Benigno acquired his Certificate in Music Major in Trombone from the University of the Philippines. In the university, he was a member of the UP Chamber Orchestra, UP Brass Quintet, and UP Symphonic Band. He was also a member of the Philippine Youth Orchestra and the Metro Manila Community Orchestra. He was under the tutelage of prof. Camilo Lapuz, Prof. Romy San Jose, Prof. Neil Ramos, Simon Gunton and Prof. Per Gade. Aside from music, Benigno is into drawing and lettering and even took a course in drafting.