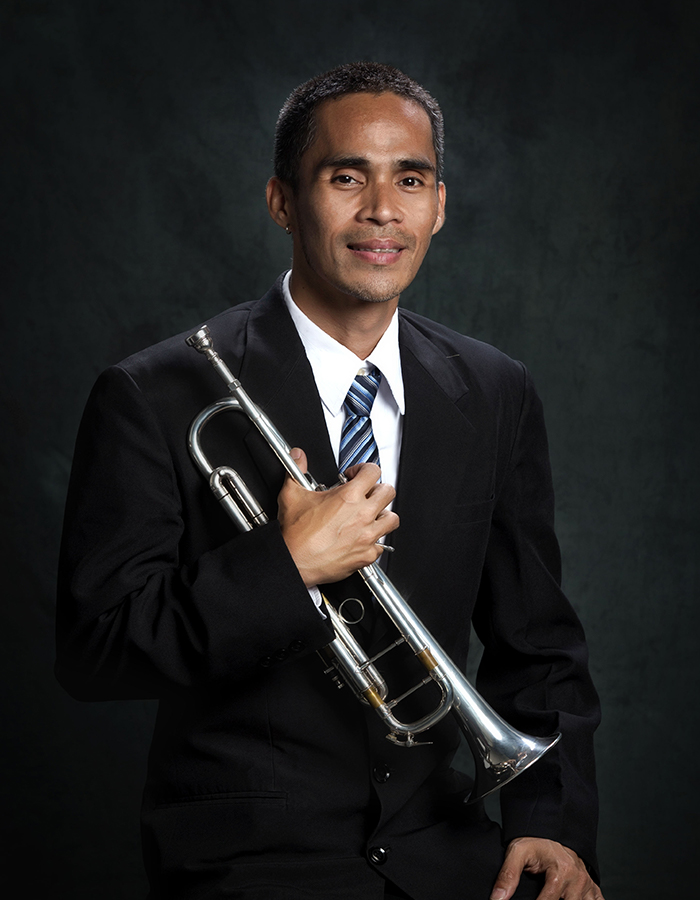 Adrian was born into a family of musicians and his natural ability started to show when he was 8 years old. His grandfather, father and uncle started teaching him how to play the trumpet at this early age. Their persistence paid off as Adrian quickly developed his playing skills. He attended the San Miguel Corporation Band Clinic as a young boy. He became a member of the Quezon City Symphonic Band which won the First Prize in the Municipal Band Competition.

Adrian joined the Manila Symphony Orchestra in 2010 and became principal trumpet in 2016. He has performed with the orchestra in gala concerts, special concerts and productions, outreach concerts, and tours, including MSO’s first international concert tour in 2019, the 5th Hunhe River Bank Symphony Art Festival held at the Grand Shengjing Theater, Shenyang, China. He also performed in various concerts and festivals in Asia namely, the Young Mozarts in Singapore in 2011, The East Malaysia Sacred Music Festival in 2014 and 2017 in Malaysia, and the SMF Sacred Music Festival in Malaysia in 2016. He also occasionally performed with the San Miguel Philharmonic Orchestra and the Philippine Philharmonic Orchestra.

Adrian studied Bachelor of Music Major in Trumpet in the University of Santo Tomas under the tutelage of Prof. Roger Llado. He also studied under Prof. Mark Anthony Mamagat. He also participated in workshops given by Belgian trumpet players Prof. Manu Mellearts and Simon Van Hoecke.

One interesting story about Adrian’s lineage is that his great grandfather, Blas Hizon, was the cornet player who gave the signal to shoot the national hero of the Philippines, Jose Rizal, in Bagumbayan in 1896. Due to intense remorse, his great grandfather escaped their barracks to join the Katipunan, a Philippine revolutionary society. After the revolution, he settled in Binangonan, Rizal, where Adrian and his family were born and raised.

Adrian has been an active member of Binangonan Youth Band ’83 Inc. since 1984. He is also the trumpet player for Sta. Ursula Parish Church Choir since 2015.